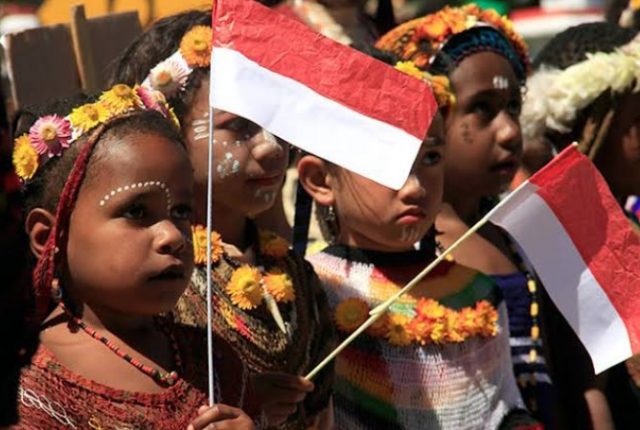 Since taking office as President of the Republic of Indonesia, Joko Widodo has shown his commitment to developing Papua. Under the leadership of President Jokowi, the government continues to carry out various development projects in the Eastern Most Province of Indonesia in order to realize people’s welfare.

President Joko Widodo is known as a leader of the country who frequently visits Papua, his visit was aimed at knowing the real problems in the field.

Deputy I of the Presidential Staff Office (KSP) Febry Calvin Tetelepta in the opportunity of a coordination meeting for infrastructure development in Biak, Papua explained, One of the government’s special concerns is the Trans Papua Merauke-Sorong Road and the Trans Island Biak Road which are one of the government’s special concerns. Because, this infrastructure is one of the 18 foremost, outermost and underdeveloped (3T) islands priority in Indonesia. In addition, the acceleration of road infrastructure development, according to Febry, has also been contained in the 2020-2024 national mid-term development plan (RPJMN) and reaffirmed through Presidential Instruction No.9 of 2020 concerning the Acceleration of Welfare Development in Papua and West Papua Provinces.

On this occasion, the Jayapura National Road Implementing Agency (BPJN) reported that all sections in its working area had been penetrated and opened with asphalt and aggregate. In addition, KSP emphasized the urgency of accelerating the construction of the access road for the Yetetkun PLBN which is being built gradually by BPJN Merauke.

Meanwhile in the Central Highlands region, BPJN Wamena continues the construction of the Trans Papua road in the midst of tough geographical terrain and the potential for security disturbances when on a road ..

The handling of the Jayapura-Wamena section is a top priority so that logistics costs can be cut and pokik needs can be distributed to various areas in the central mountains.

Regarding Road Infrastructure in West Papua, BPJN Manokwari ensures connectivity support in Raja Ampat Priority Tourism Destinations and Kota Baru Sorong and continues to improve the stability of the Manokwari-Bintuni section which is the center of government and economy in West Papua.

He also requested that activities with labor-intensive schemes be increased to empower local communities.

In early 2021, some of the trans Papua roads have begun to be completed and are able to connect between regions, one of which is the road connecting Wamena-Jayapura.

The construction of the Trans-Papua Road is President Jokowi’s policy to improve the welfare of indigenous Papuans, then catch up by opening up access from one area to another.

Some curious indigenous Papuans also started to go through this road even though at that time the road had not yet become 100%, as was done by Yoni’s sister and friends who took the 3-day Jayapura-Wamena trip in 2018 and it became 2 days faster. in 2019 because the road has started to finish.

According to him, Presidential Instruction (Inpres) Number 9 of 2020 concerning the Acceleration of Welfare Development in Papua and West Papua is the basis for the government’s commitment to resolving the root problems experienced by the Papuan people.

In particular, President Jokowi has also issued presidential regulation (Perpres) Number 17 of 2019 concerning the procurement of goods and services in the context of accelerating welfare development in Papua and West Papua which encourages the alignment of ministries / institutions and local governments in increasing the capacity of Papuan business actors.