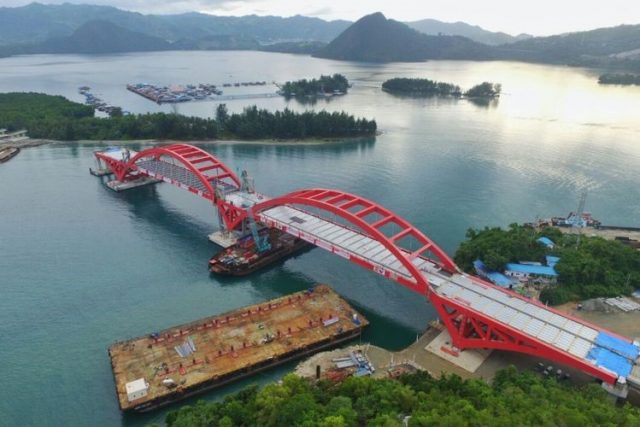 Cendrawasih (Paradise) Bird is one of the most beautiful birds in the world. The diverse colors which support each other create a beautiful art setting on the Cenderawasih fur. The beauty is also similar to Papua, where the Cendrawasih lives a lot and become the icon of Papua Province.

Papua is Indonesia’s largest province located in the central part of Papua Island or the easternmost part of Indonesia’s Papua. The Papua Province, which formerly called Irian Jaya, covered the entire western part of Papua Island. Since 2003, Papua Province has been divided into two provinces. The eastern part retains the name Papua while the western part is given the name West Papua. Papua has an area of ​​316,553.07 square kilometers as the largest province in Indonesia.

Papua also has pretty high economic potential. Papua’s natural wealth is very rich that it has not yet been explored. Papua Province has an area of ​​around 421,981 square kilometers with a population of only around 2.3 million. More than 71% of Papua is a tropical rainforest that is difficult to penetrate because it consists of steep valleys and high mountains, and some of the mountains are covered by snow.

West Papua Province also has tremendous potential, the agriculture, mining, forest products, pearls and seaweed, traditional weave industry (Timor cloth), nutmeg syrup, and nature tourism such as the Cenderawasih Bay National Park, which stretches from the east of the Kwatisore Peninsula to the north of Rumberpon Island with a coastline length of 500 km with 80,000 hectares of coral reefs and 12,400 hectares of ocean.

After the independence of Indonesia, development in Papua has begun along with the development in other regions in Indonesia. Development is a process of change that is carried out continuously towards a better direction through a series of efforts consciously by a nation, state, and government towards modernity in the context of a nation’s planned configuration. That is a dynamic process regulated through the government’s policies that provide opportunities for the realization of an equitable and prosperous society based on state ideology. Mutual support between the government and the private sector is an absolute thing that must synergistically take place. Thus the goals can be arranged in a realistic step that can accommodate aspirations in harmony and complement each other in line with the ability of the budget.

The abundant natural wealth in Papua is very encouraging for investors because of the huge profit opportunity. But the development effort is not as smooth as a falling waterfall, many challenges, and obstacles. The dynamic political situation and geographical conditions in the province of Papua which heterogeneous with deep valleys and hills so that the area becomes painful to reach. It makes the development hampered. Additionally, the complex distribution of the development funds for a country that has large areas makes those potentials are much untouched. Besides, entrepreneurs who wanted to invest require adequate infrastructure such as roads, bridges, ports/docks, airports, and so on as well as security guarantees.

Considering the vast area and geographical location of the Papua which consists of mountains, hills, valleys, and seas, the facilities and infrastructures are needed to connect one region to another and to distribute the results of the natural resources.

One of the projects that ought to be excellent is the construction of the Trans Papua road, which began in the Habibie’s era and continued by SBY, accelerated by President Jokowi’s government. The development of transportation infrastructure in Papua is the main tool of the Papuan people in mobilizing advancement base, in addition to reducing high costs, it also grows the economy of the local community and its surroundings along the Trans Papua-West Papua road.

The non-stop development in every foundation of economic growth has a dynamic variant in encouraging the creation of community creativity that arises from the values ​​of cultural and social structures so that physical construction stimulates the development of connections and roles for the modernization of life. This is because infrastructure is a form of public capital that is formed from the investment by the government.

The acceleration of development carried out during Jokowi’s administration was an effective and professional breakthrough. This can be seen with the decreasing poverty rate in Papua and West Papua. In 2012, poverty in Papua Province by 30.66% decreased to 27.74% in 2018 and in West Papua Province from 27.04% in 2012 to 23.01% in 2018.

Public awareness to improve the comfort and better quality of life greatly support the success of infrastructure development in Papua and West Papua. A nation and state life require a cohesiveness between the community and the Government.

A decision is a meeting between the consideration of the main factors (focus) with the surrounding environmental factors. The decision of development must be professionally grounded in the moral values ​​of the state and national social responsibility. As a nation that holds firmly the Pancasila, of course, our national responsibility must be upheld above the interests of individuals and groups.