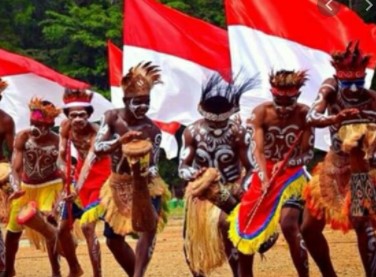 The National Police Chief of Indonesia once said emphatically that the ULMWP (United Liberation Movement for West Papua) and the KNPB (West Papua National Committee), in their actions mobilized students who were members of the AMP (Papuan Student Alliance), in further tracing the names Benny Wenda and Veronika Koman emerged.

Benny Wenda is a British citizen who lives in Oxford, England, while Veronika Koman is an Indonesian citizen currently in Australia. They are suspected of having networks with foreign parties, even on the Veronika Koman account, it proves that there is an inflow of funds from abroad and accounts outside Papua.

With the separatist movements in Papua and West Papua, it was also revealed that Veronika’s role was to send news and photos of events in Indonesia (such as events in Malang, Surabaya, and Papua) to Benny Wenda and foreign NGOs (Non-Government Organizations). With her network, Veronika has gone to Australia where her husband lives,

Through her social media accounts, Veronika is always active in spreading hoax news abroad in the hope that there will be several countries and foreign NGOs sympathetic to childish demonstrations, and also make it appear that Indonesia has committed human rights violations against Papuans. The East Java Regional Police have assigned Veronika Koman to the DPO (people in search).

It is undeniable that one of the small Pacific countries, Vanuatu, also very often voices its support for the OPM (Free Papua Organization) in international forums.

It is noted that since the New Order era of Indonesia, the country has consistently supported OPM, but other countries in the South Pacific, such as Papua New Guinea, Australia, and New Zealand, firmly reject and do not recognize the existence of OPM in their territory, they still maintain that Papua is the territory of the Republic of Indonesia.

The Papua New Guinea government has also said several times that it will not tolerate its territory as a hiding place or a base for OPM soldiers who fled when being chased by TNI officers.There were OPM soldiers who were later detained in the Papua New Guinea Detention Center, although they were released again after having their weapons confiscated.

Therefore, it has become increasingly clear that foreign parties, be it NGOs, individuals, or the Vanuatu State were the ones that mobilized anarchist demonstrations in Papua and West Papua some time ago.

They use racist issues to fry and mobilize people to carry out anarchist actions so that they do not hesitate to show resistance to the Police. With the hope of chaos and international attention, the world then called for a referendum for Papua.

Papuans do not support anarchist actions, they love peace and are proud to be part of Indonesia. It is foreign nations who have pitted the Papuans against each other because they have interests

However, hopes for a referendum seem to have vanished, because all people do not support anarchist actions that cost property, property, lives and of course harm the small Papuan community.

Finally, the Papuan people realize that they love peace and love the Republic of Indonesia, of course with the incident some time ago now the Papuan people must be careful if they are going to hold a demonstration, not to be infiltrated by foreign minions who deliberately sacrifice the community for the sake of those who are sitting pretty. abroad while watching the news about anarchist actions in Papua.