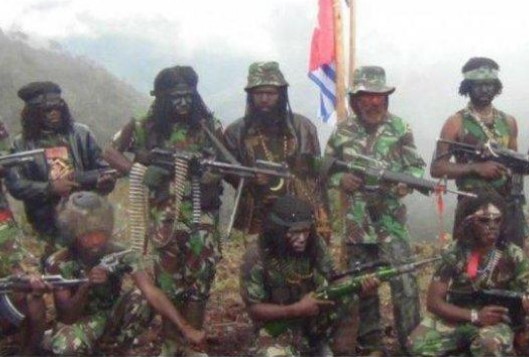 The armed criminal group (KKB) deserves to be eradicated because they always commit atrocities in Papua. In effect, development is hampered, because they frighten the workers with firearms. In addition, the community is also anxious about doing activities for fear of being suddenly attacked by the KKB.

Papua is a beautiful area but unfortunately it was ravaged by separatist groups (OPM) and their gangs (KKB). They were born because of the protests with the results of the Pepera in 1965, so they did not consider the central government in Jakarta to be legitimate. The OPM and KKB’s obsession is to liberate themselves and create the Federal Republic of West Papua. Therefore they must be exterminated, because they are traitors to the state.

Since decades ago, KKB has helped OPM to realize its ideals of independence and fly the Morning Star flag. This action is certainly wrong because it includes separatism. Other flags may not fly and replace the red and white saka. There are no country stories within a country. Moreover, Papua is Indonesia’s legal territory, based on international law, because it is a former Dutch colony.

However, the KKB still insists on breaking away from Indonesia. To make their wishes come true, they take various actions. Starting from propaganda to acts of violence. Propaganda is usually carried out on social media and the KKB raises the issue that the central government wants to eradicate the Melanesian race. Even though it is just a hoax, because Indonesia already consists of many tribes and races and there have been no cases of racism at all.

In addition, KKB must be eradicated for committing various acts of violence. Starting from taking pilots and passengers hostage in Puncak Regency and threatening them not to transport members of the TNI and Polri. Hundreds of residents held hostage in Kimbeli Village, Mimika. Until shooting a helicopter in the Tembagapura area.

The KKB’s various atrocities have made the crackdown of this group more intensive. First, access that must be blocked is social media and websites. If there are Facebook, Instagram, Twitter, and sites that are named KKB, then the cyber police can immediately comb them. Then ask the social media or Google to block the account.

If social media accounts or websites have been blocked, then KKB cannot launch propaganda in cyberspace. The public will not be easily affected by hoaxes or the issues they spread. Because the KKB does not have a place to spread propaganda and fear the Papuan people.

The Densus will hunt down KKB and their troops will be more competent in pursuing them, because they are more experienced. Also equipped with a complete firearm. If Densus helps the authorities in Papua, it is hoped that the arrest of the KKB will be more intensive and will be completed quickly. So that members of this group will be quickly exposed and interrogated, where is the real headquarters.

That way, KKB will be eradicated more quickly. The eradication must indeed be carried out intensively, because it is aimed at security and peace in the Cendrawasih Earth region. The community is no longer afraid to carry out their usual activities and will not be overshadowed by the KKB’s atrocities.

KKB must be eradicated because they have committed various atrocities, ranging from attacks to shooting by security forces. The elimination of the KKB is an important agenda, because if they have disappeared from the land of Papua, peace will occur. There is no more fear ahead of December 1 (the OPM’s birthday) and no one forces them to fly the Morning Star flag.