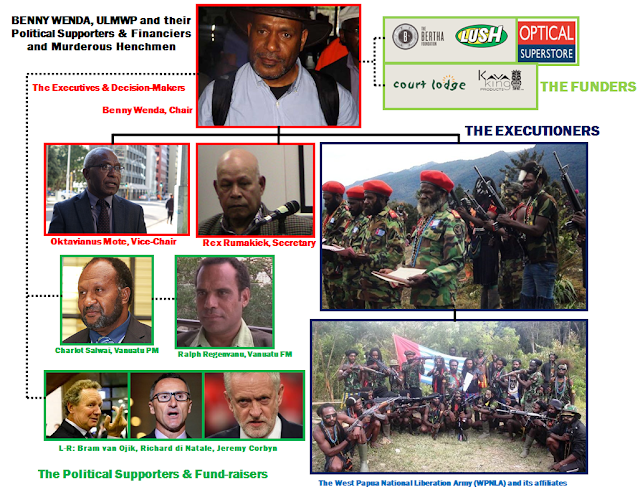 Benny Wenda lives the first-world life. Living in an upper-middle class home in Oxford, Britain, he frequently jets around the world flying business or first class. Jetting back and forth from the mega-cities of London to New York, Wellington, Melbourne, Wenda is also at home in the tropical paradise of Port Vila Vanuatu.

The leader of the United Liberation Movement for West Papua (ULMWP), a small band of Papuans living overseas who are pushing to annex the province of West Papua from Indonesia, Wenda receives millions of pounds collected from his network of loyal supporters. Supporters who in turn organize fund-raising events such as music concerts, corporate contributions, cultural nights, movie nights and etc.

Among the corporate contributors to Benny Wenda or the ULMWP are household brands Court Lodge, Lush Cosmetics, Peter Thatchell Foundation, Bertha Foundation in the United Kingdom and the Optical Superstore in Australia. 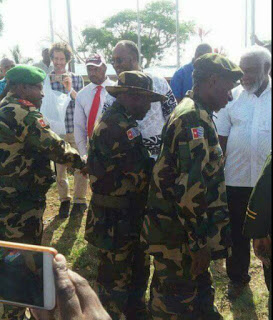 But the jet-set life facade of Benny Wenda hides a dark truth.

The organisation he heads, the ULMWP, have a strong link and chain of command with a number of armed separatist group West Papua National Liberation Army (WPNLA) in the provinces of Papua and West Papua, Indonesia.

The group and its affiliates are known and have been proven to be behind many murders, killings, kidnappings and other crimes in West Papua.

In April, Vicky Rumpaisum, an army private was murdered by the group. This Papuan native was on patrol in Timika when he was shot in cold blood by a group linked to the ULMWP and Benny Wenda. Private Rumpaisum was a decorated army private who have served as a peace keeper for the United Nations in Lebanon.

Then there is the story of the shooting dead of a Sandi Novian, an army private first class who was doing his weekly shopping on 13 February 2018 at the local market in Sinak Papua.

As reported by Reuters and Radio New Zealand, five members of the separatist criminal group armed with guns and machetes attacked and murdered the private in the market in front of the public.

ABC Melanesia Sources can now reveal that some of those funds received by Benny Wenda and the ULMWP ultimately reaches the WPNLA and its affiliate groups. Money which in turn is used to finance and arm the separatist groups in West Papua to kill civilians and security forces indiscriminately.

The Vanuatu Daily Post reported on 10 February 2018 of a statement by Jacob (Yakob) Prai, the founder of the Free West Papua Movement or Organisasi Papua Merdeka (OPM), the armed wing of the separatist group:

“I as the founder of the Free West Papua Movement or Organisasi Papua Merdeka (OPM) want to acknowledge and support the United Liberation Movement of West Papua that it is a political organisation that carries the spirit of OPM that will continue the struggle and fulfill its final mission, which is establishing the full independence and sovereign Republic of West Papua.”

It was further revealed that Benny Wenda met with Mr Prai in Sweden on 28 December 2017. Sources reveal that Mr Prai reported a number of “military operation” conducted by the OPM on the direct orders of Benny Wenda. 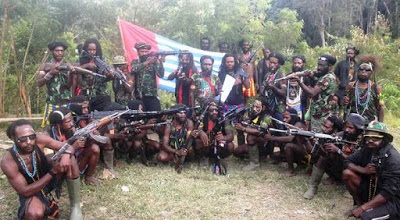 Jacob Prai, founder of the armed separatist group in West Papua revealed that he receives orders from Benny Wenda

A number of murders committed by the West Papua separatist group includes the following:

Emboldened by the strong political and financial support from Vanuatu PM Salwai and FM Regenvanu, sources reveal that Benny Wenda ordered his armed-wing in West Papua to inflict damage through more murders and kidnappings.

The allegation of complicity of PM Charlot Salwai and FM Ralph Regenvanu in past murders and kidnappings and active support for the separatist group future criminal acts is a serious one.

Failure for Salwai and Regenvanu to answer those serious charges amounts to them having blood on their hands. 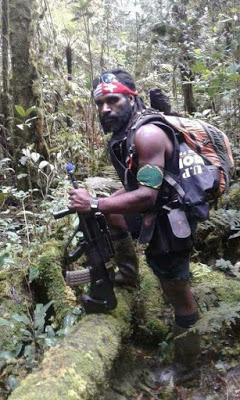 Member of the armed separatist group pose with an automatic weapon (Photo: Facebook) 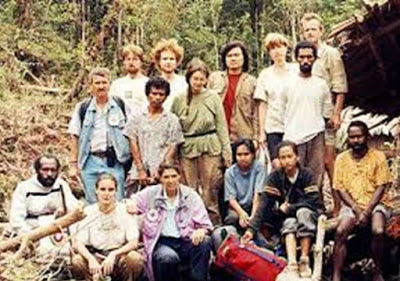 The ULMWP is led by Benny Wenda, a fugitive wanted in connection to the murder of West Papuans Petrus Epaa and Markus Padama in Papua in December 2000.