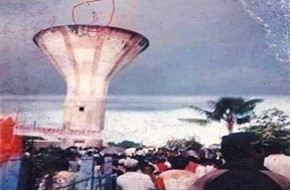 The Bloody Biak Incident, also known as the Tower Incident, took place on July 6, 1998. It began with the raising of the Morning Star Flag which belongs to Papuan’s separatist groups in a 35-meter tower located near the Seaport of Biak, West Papua. The flag fluttered from July 2 to July 6, 1998. Around the tower, the crowd who supposed to be supporters of Papuan separatist danced, sang, and shouted independence yells. They even held an open stage, where one of the activists who joined the mass delivered or read aspirational demands on behalf of the Biak people to be independent or free from the Republic of Indonesia.

Considering the situation that was not conducive at that time, Biak Regent who was accompanied by the security apparatus calling for the protest to be stopped. However, this request was not appreciated or heeded by the mass of protesters who were dominated by many members and sympathizers of Papuan separatist organizations. So, at that time the National Police and the National Army (TNI) took actions while several groups in Biak view it skeptically. The groups considered it was excessive and even full of human rights violations.

A maneuver was conducted by the International Lawyer for West Papua (ILWP) and an effort on October 25, 2000, by the Director of the Papuan Human Rights Study and Advocacy Institute (ELSHAM), John Rumbiak, signed a Memorandum of Understanding with Greg Sword, a member of the Melbourne state-level parliament from the Labor Party. It means, the attempt to internationalize the incident was designed with support from foreign political power.

If it is accepted by the international organization and international community, the consequence is the people of Papua must be given the right to determine their destiny and that means a referendum must be held. At last, the referendum is precisely the goal of the internationalization attempt of the problem. All of it leads to the separation of Papua from Indonesian territory.

And it turns out that internationalization efforts have not had any impact, aka unsuccessful. At least it made Papuans and Indonesian aware that the problem of Papua was only “commodity or political consumption” for foreign politicians who collaborated with foreign compradors in Papua and other regions in Indonesia.

The people of Papua need to realize that the Indonesian government is currently serious fixing and improving the welfare of the Papuan. So that, it will be better if they participate in the development rather than joining the political bid of Papuan separatist groups and their supporters that filled with the pragmatic goals of their elites to continue making a variety of Papuan problems just for “political consumption”.

Appreciating the Acceleration of Welfare Development in Papua | by Windy Putri

The Government of Indonesia’s Efforts to Accommodate the Interests of the Papuan People through Special Autonomy for Papua | by Terry P.

Appreciating the Acceleration of Welfare Development in Papua | by Windy...

The Government of Indonesia’s Efforts to Accommodate the Interests of the...

Supporting Law Enforcement Efforts for Security Stability in Papua | by...

Supporting the Expansion of the Papua Region to Improve the Welfare...

Papua is an integral part of the Republic of Indonesia, Rejects...