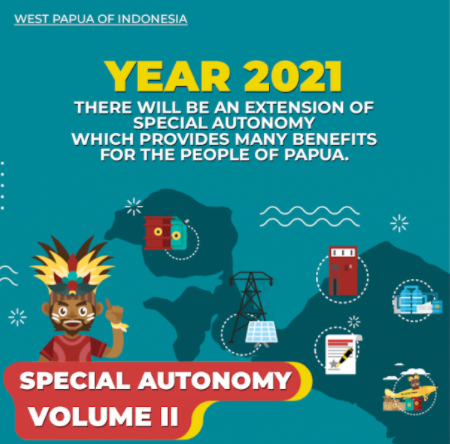 Special autonomy in Papua will be extended next year. The extension of the otsus was very well received by the indigenous Papuan people, both those there and on other islands. They feel that otsus volume 1 brings progress for Papua. Therefore, the special autonomy must be continued, although there must be some revisions to improve this program.

Papua is an eastern region in Indonesia that is quite advanced, thanks to the existence of an international airport, modern ports, and other infrastructure. Papua’s image as an area full of wilderness and no modernity immediately disappears. Because there the facilities are quite complete and not inferior to Java or Sumatra.

The progress in this land of paradise is due to a special program from the government, namely special autonomy. Otsus, which began in 2001, was a great success, and next year it will be continued again. Due to the validity period for 20 years. In implementing otsus volume 1, the government has poured billions of money to develop Papua so that its people can prosper.

The people of Papua look forward to volume 2 of Otsus because it can advance their region and continue some infrastructure development. Don’t let this program just stop. If it stops, it will be a shame, because it is like a stalled project. Special autonomy must be continued, so that there is no imbalance in progress between western and eastern Indonesia.

John Kandam, Chairman of the Forum for Religious Harmony, stated that the public would be happy if the special autonomy was continued with a mechanism that touched the community in general. In that sense, there is no such thing as rejection of Special Autonomy Volume 2. If some refuse, then it is questionable, because thanks to Otsus, many facilities have been built in Papua.

The success of special autonomy volume 1 has been seen with the existence of the Trans Papua road which makes transportation easier for people in the land of paradise. There is also Sentani international airport, a modern port in Raja Ampat, and many other infrastructures. The education of Papuan children is also guaranteed by adequate scholarships and school facilities.

If some are still not satisfied, then they can provide input so that special autonomy volume 2 runs better. Of course in a way that is following the procedure, namely through the members of the Regional Representative (DPRD) Papua. John Banua Rouw, Chairman of the Papua DPRD, said he was ready to bring the aspirations agreed upon by the community regarding the revision of special autonomy and brought it to Jakarta.

The revision of special autonomy can be in the form of a nominal additional autonomy fund. Because of the construction of infrastructure and other facilities needs more cash. The value for money is of course very different from the previous year, and the price of cement and other materials is also creeping up.

Besides, it is also hoped that volume 2 of the special autonomy system will not only focus on infrastructure development. But also increasing human resources in Papua. If the people there are allowed to become local officials in their area, then prospective leaders must be prepared from an early age. School buildings are good and must have competent teachers. And paid a decent salary.

Papuan students who are mostly educated in Java are also required to return to their homeland. Not only to build a career but also to broadcast the knowledge that has been learned so far. So there is no more intelligence imbalance in Papua because there is a transfer of experience and knowledge from them.

The community is waiting for special autonomy volume 2 because it can advance the Papua region. Not only in terms of infrastructure but also human resource development. So the Papuan people can get smarter and can develop their regions. As well as bringing Papua to modernity.