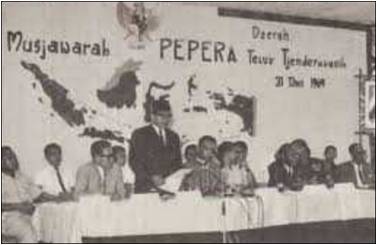 Even though there are many people out there who say that Papua is not part of the Unitary State of the Republic of Indonesia (NKRI), even to the point of wanting to be independent, the author in this paper provides a straightforward historical fact that this is wrong. Since 1969, when the Popular Opinion Determination (Pepera) was implemented, Papua, which was then still called West Irian, was a legal and integral part of this nation.

De facto, since May 1, 1963, the United Nations (UN) handed over Papua to be administered by the Indonesian government, after the Tri Komando Rakyat (Trikora) proclaimed by President Soekarno. Even though it has been administered by the Indonesian government, West Irian is still not part of the Republic of Indonesia. It was only in 1969, after the Pepera, that West Irian officially became the territory of the Republic of Indonesia.

If we want to talk about Pepera, its history is very long. Pepera itself was held from 24 July to around August 1969. The United Nations supervised the historical events that would unite Papua to Indonesia. That is why the Act is not a trick by the Indonesian government but based on international recognition, especially through the United Nations. A total of 16 UN representatives were sent to Papua to oversee the course of Papua. Initially, 50 people were sent, but due to various considerations, only 16 were left to carry out monitoring. The task of overseeing the implementation of the Act began on 23 August 1969.

The number of discordant notes that say that the UN was pressured by the Indonesian government is also not true. For example, the number of 16 representatives also came from the United Nations. They agreed to reduce their number of representatives not because of pressure from Indonesia. Then, is it possible for a large organization that has a very strong Security Council with world hegemony countries, such as the United States and Russia, to be intervened by Indonesia? The
odds are of course sparse.

The results of the Act in 8 districts select and determine that Papua is part of the Republic of Indonesia. The results are then agreed upon and approved with the signatures of all those present at the meeting. De facto the Papuan people choose to integrate with this territory of the Republic of Indonesia. The Pepera itself was passed through UN Resolution No. 2504 at the UN General Assembly on 19 November 1969 approved by 82 countries, while 30 other countries voted to abstain.

This UN General Assembly is de jure proof that Papua is a legal and integral part of the Indonesian nation, as well as being one with the Republic of Indonesia. Likewise in the eyes of the international community, because bypassing the resolution, the international community will recognize the Act process. Thus, the adoption of this UN resolution is considered a valid document because the Act has been implemented. Even with a representative system (DMP), the results of this Act was well received as a final decision.

UN Resolution Number 2504 is a firm statement of UN recognition of Indonesia’s sovereignty over Papua. On that basis, we need to understand that every attempt to separate ourselves from the Republic of Indonesia is an act of opposition to applicable international law. UN resolutions are recognized internationally as a form of international law.

The problem now is, for those who question the legality of Papua to be part of Indonesia, even want Papua to become independent, it means that these parties have not learned history and law. Opposing Indonesian sovereignty in Papua is not only an act against our national law but also against international law in the form of this resolution. Then, the UN resolution is also a small part of the UN Charter which has been recognized by all 193 UN members in the world.

That is why the author dares to say that Papua is an integral part of Indonesia, especially after 1969, when the international community recognized Indonesia’s presence on Earth of Cenderawasih. It is a historical and legal fact that the author thinks is difficult to refute, especially by throwing baseless arguments or opinions, just to influence public opinion.