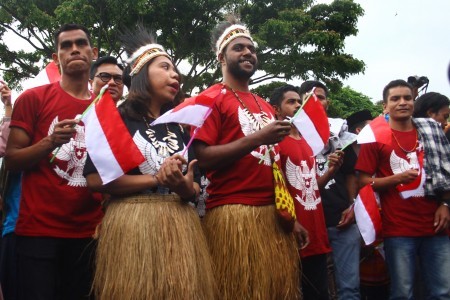 Representatives of traditional leaders, religious leaders and youth in Papua Province admitted that they agreed that the Special Autonomy Fund (Otsus) policy should be continued to improve the welfare of the people in the eastern tip of Indonesia.

Titus Mebri, an ondoafi or traditional leader from Yoka Village, claimed to represent 14 villages and 12 keondoafians in Jayapura City, asking that Otsus continue.

Titus stated that all agreed that Otsus had to be right on target, including the beneficiaries. If so far there have been those who say that Otsus failed, that does not mean it has stopped. Otsus must continue to roll for the benefit of the people in Papua.

Titus emphasized that there is no reason to stop central government policies that can improve the welfare of indigenous Papuans, especially in improving human resources.

Sem Kogoya, Deputy Chairperson of the Papua Central Highlands Community Controller in Jayapura City, assesses that so far the community has only known and heard the nominal value of the Special Autonomy fund, but seeing and feeling the money has never happened so this has often been the case for rejection.

According to him, the Special Autonomy fund is only managed and enjoyed by the Papuan political elites from the executive, judicial to legislative levels without thinking about the future of the small community who are actually devoted to receiving benefits from central government policies through the Otsus program.

For this reason, Sem asked the central government through the relevant agencies and ministries to act decisively if they encounter indications of misappropriation of Special Autonomy funds.

“Therefore, law enforcers such as the Attorney General’s Office, Courts and Polda Papua must be firm in this matter”

He took an example, Jayawijaya District received billions of rupiah in Otsus funds, then the funds were distributed to the community or even to the head of the family, which actually provided a salary to support its welfare, but this did not happen.

Meanwhile, Pdt Johanes Wenda, as the General Secretary of KINGMI Indonesia in Papua Province emphasized that Otsus was born to improve the welfare of the weak, poor and unable to afford their children to get a decent education as the spirit of Otsus was enforced.

If the policy of providing special autonomy funds is continued in line with the initiative of the central government, then the law must be enforced against parties who have diverted the disbursement of funds that have occurred so far, so that there is a deterrent effect and learning so that others are not incited to steal people’s money.

Meanwhile, the Papuan youth leader, Ali Kabiay, stated that as the nation’s next generation, he supports the programs carried out by the government.

According to him, there are four areas in Otsus that must be improved by the Papua Provincial Government, namely education, health, basic infrastructure and the people’s economy. Where the funds that have been disbursed from 2002 to 2021 have reached Rp. 126.99 trillion, this is of course a very large fund. If this is used properly and correctly, then of course, the people in Papua will progress and prosper according to these four areas.

Government Optimizes Use and Supervision of Special Autonomy Funds in Papua, by Ignatius Mattew

Absorb the Community’s Aspirations for the Advancement of Special Autonomy in Papua, by Denny R.

Government Optimizes Use and Supervision of Special Autonomy Funds in Papua,...

Absorb the Community’s Aspirations for the Advancement of Special Autonomy in...

Development in Papua, by Romario Ignatius

Special Autonomy as an Effort to Optimize Development  in Papua, by...