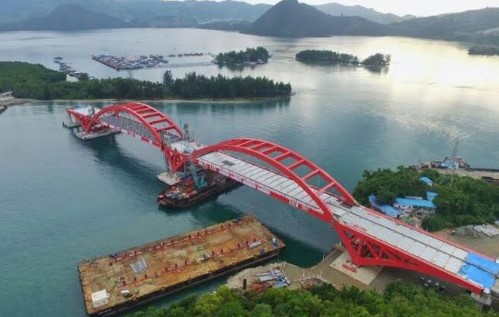 Papua is a potential area because it has abundant natural resources. Unfortunately, progress there has not been as fast as in Java or other islands.

“To accelerate the modernization of Papua, the government has created a special autonomy program that has been running since 2021”

In addition, there is also a presidential instruction to develop the Papua border area.

Presidential Instruction number 1 of 2021 contains the acceleration of economic development in the border areas of the country, to be precise in Skouw, Motaain, and Aruk. These programs will be handled by several ministries, in order to be 100% successful. So that even the Papuan people on the border will feel equitable development.

The programs that will be handled by the Ministry of Public Works and Housing include construction of border primary irrigation canal inspection roads, construction of boat moorings, a drinking water supply system, a 4.5 meter-wide main road for Kampung Mosso-Keerom Regency, Jeramba road in Enggros, as well as improvements. the quality of the provincial road that connects the Kelurahan Kroya Tmur and Kroya Barat.

These programs are increasingly complemented by market revitalization in border areas and other programs handled by the Ministry of Marine Affairs and Fisheries. Among other things, the construction of ponds, fish ponds for farmer groups, and seed and feed cultivation facilities.

It is hoped that the number of programs that will be implemented in Skouw will accelerate modernization in the Papua development area. So that on earth the paradise will not be far behind from other provinces. Because the government is trying hard to implement Pancasila, especially the principle of justice for all Indonesian people. All Indonesian citizens will enjoy the results of development and no longer languish because they feel ignored by the government.

When there is equitable development in the Papua border area, residents in Skouw and its surroundings will enjoy wide, flat, and good roads. They are also happy because they are given many facilities by the government. Starting from an upgraded rice mill , a corn processing plant, a very decent pond, to a fish nursery.

This shows the government’s attention to residents in Skouw and its surroundings. They are not only facilitated by good roads. But also given the facilities and infrastructure for entrepreneurship, both in fisheries and agriculture. So that the people in Skouw will be more envious and get more income than when they are regular employees.

In addition, by encouraging residents to become entrepreneurs, it will help the government to reduce unemployment. Because if their business is successful, it will take a lot of employees to support their business. So that poverty in remote areas of Papua will be eradicated.

All residents in Skouw and its surroundings are grateful because they get a lot of facilities from the government. Since the beginning of his tenure as RI-1 (2014), President Jokowi has been very concerned about the Papuan people. So that development on Earth of Cendrawasih is boosted, to make them prosperous.

The Presidential Instruction on development in the border region of Papua shows that the government is trying to be fair in memorizing all parts of Indonesia. People in Papua, especially in Skouw and its surroundings, are grateful because they get so many facilities. So that their lives will get better.