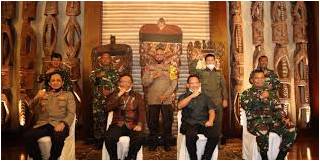 Papua is an increasingly advanced area of ​​eastern Indonesia. This is evidenced by a large amount of infrastructure built by the government. President Jokowi has indeed paid attention to Papua since his election, in 2014. The goal is that all regions in Indonesia are developed and there are no differences in the economic and social fields between Papua and Java.

Papuan people also include Indonesian citizens. Therefore, they do not have to feel marginalized and think why the situation is so different therefrom Java or Sumatra. Indeed, nature in Papua is different, because there are steep mountains and virgin forests. This causes slow transportation which results in high prices for goods.

To overcome this, the government is building Papua so that the lives of its people will get better. The government’s attention is in the form of the construction of the trans-Papua road that connects the provinces of West Papua and Papua. After the existence of this road, it is hoped that the traffic and delivery of goods will be smoother and facilitate the mobility of the Papuan people.

If the delivery is smooth and fast, the price of the goods can be automatically lowered. Especially with the Papua One Price policy launched by the government, through state-owned oil companies. This is another concern of the president so that the price of gasoline and diesel can go down. Of that which can reach 150,000 rupiahs per liter, so only 6,500 per liter.

Another development in Papua is the port project in Sorong. Its construction has been since 2015 and will be brought forward again so that it can become an international harbor. This status is very important so that the waters around Papua can be more advanced. If the port is developed, the community will also benefit, because there are many tourist visits.

The government’s move to advance the international port in Sorong is related to the sea highway project. The position of the port which is strategic can be the main link of the sea highway route for the Papua region. So later on, water transportation in Papua will also run smoothly, so that logistics delivery will be faster. The community benefits because they no longer wait for packages too long.

The government is not only thinking about advancing land transportation in Papua, but also water transportation. Likewise with the Sentani international airport project. If air transportation is also carried out, the distribution of goods to mountainous areas such as Oksibil will be faster. This delivery is very important, especially for food ingredients.

To bring about progress in Papua, the government does not hesitate to spend billions of rupiah. These funds come from mining company taxes in Paradise. The government also provides rules and supervision, so that the funds provided are truly absorbed and there is no opportunity for corruption by the officials there.

President Joko Widodo is very concerned about Papua, he even visited it 13 times. This was stated by the Minister of Economy of Indonesia Airlangga Hartarto. The President hopes that all regions in Indonesia have equality in the economic and social fields, including Papua. So that the people there will be more advanced

Papua is also part of Indonesia, even though it is far to the east. Even though the government is located in the western part of Indonesia, it does not mean that the eastern ones are being forgotten. There are indeed differences in building there, especially in terms of approaches to indigenous people and their cultures. However, this can be overcome with good communication.

The government is trying hard to advance Papua by building infrastructure, including roads, waters, and air transportation. All of these projects are intended to make Papuan society more advanced. Besides, it is hoped that there will be no more news about poverty there because people are increasingly prosperous and live in an orderly manner.